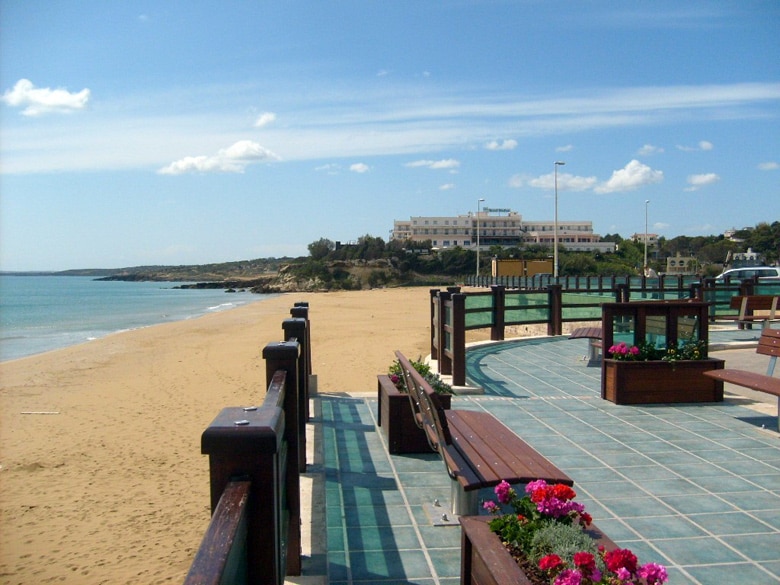 Lido di Noto also called Noto Marina, it is a seafaring village of the city of Noto, from which is about 5 km away. it is distinguished by its beach composed of fine golden sand and, in the summer is the holiday destination for tourists from around the world. In the township, established in 1928, there are many beach clubs. Over the years it increased by several villas as well as the tourism infrastructure.

Noto is located in the Val di Noto. Vallo di Noto or Val di Noto was an administrative district who took charge of justice, of the government and even occasionally the militias of the Kingdom of Sicily by the Norman period until its abolition in 1812.

In 2002, some of the towns included in the Wall were recognised as World Heritage Sites.

The hotel is therefore strategically located for visiting the entire Noto Valley and surrounding towns, and guests will enjoy the proximity of the sea.

In a region where olive and almond trees abound, Noto is a small Baroque jewel perched on a plateau overlooking the citrus-covered Asinaro valley. Its beauty, so harmonious as to seem like a fiction, the scene of a theatre, was born of a tragic event: the earthquake of 1693, which brought death and destruction to this part of Sicily, but gave impetus to reconstruction. Before that, the town stood 10 km away. Of very ancient origins, Noto was the birthplace of Ducezio, who in the 5th century BC caused the Greeks to tremble because he had the Sicels rise up against them.

The 1693 earthquake completely destroyed the city. A less impervious and larger site was chosen for reconstruction, allowing for a simple, linear layout, with right-angled intersections and parallel, widened streets in keeping with the new Baroque taste. There are three main streets running from east to west so that the sun always shines on them.

Three social classes settle there: the first, highest, is for the nobility, the middle for the clergy (the only exception is the centuries-old Landolina palace), The palaces are majestic, all built in the local limestone, soft and compact, with a whiteness that time has coloured, creating that magnificent golden and pinkish hue that the light of sunset accentuates, this reconstruction, led by the Duke of Camastra, the Spanish viceroy's representative in Noto, involved many Sicilian artists, including Paolo Labisi, Vincenzo Sinatra and Rosario Gagliardi, who, influenced by Borromini, was perhaps one of the most inventive.

The town is built as if it were a stage set, studying and making up the perspective in a singular way, playing with the lines and curves of the façades, with the decorations of the corbels, the curls and volutes, the masks, the putti, the balconies with wrought iron parapets that bend into graceful, bellied forms. Original creations by local masters. However, Noto is part of the panorama that from the hands of Italian artists saw the Baroque dream flourish throughout Europe and gave life to the new Russian capital, St Petersburg. 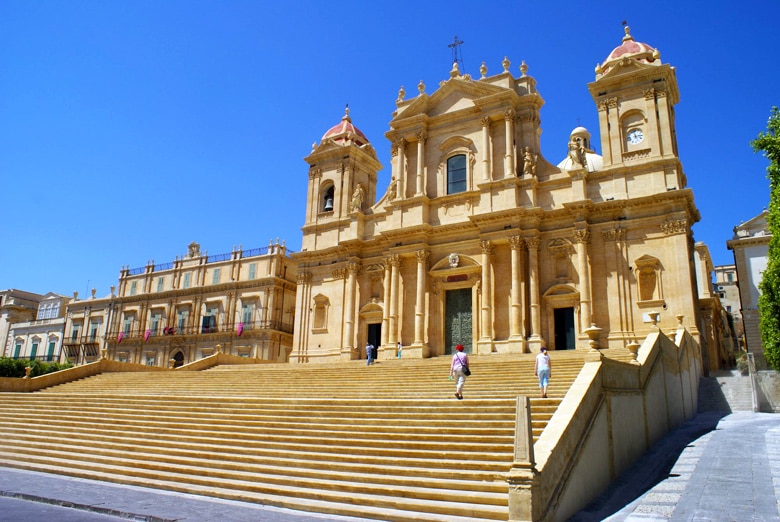 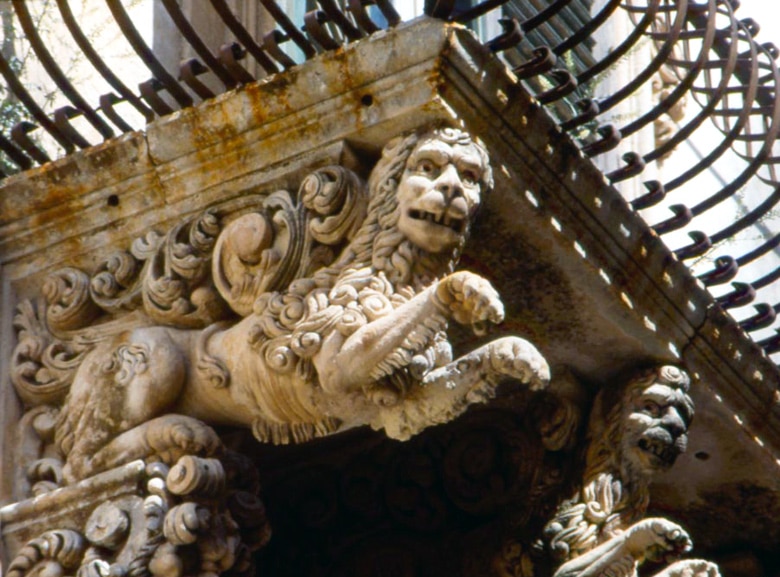 Avola lies on the coast, in the area south of Syracuse, along one of the oldest Greek routes in Sicily: the Via Elorina. The area in which it is located is an exceptional container of cultural and environmental assets, of which the town is the 'gateway'. From the large Piazza Umberto I, formerly Piazza Maggiore in the famous hexagonal historic centre, the Baroque "streets" begin and lead to the spectacular nature reserves of Cava Grande del Cassibile and Vendicari.

The flat site of the town of Avola is located in an extraordinary landscape, between the Ionian Sea and the Iblei mountains, between a coastline with warm, fine, golden sandy beaches and the coolness and scents of the Iblei hills surrounding it to the north-west. This favourable microclimate has allowed the cultivation of sugar cane - from the 15th to the 19th century -, vines, almonds and lemons, the fruits of which continue to provide excellent products today. Avola has linked its name to world-famous agricultural products such as the almond or "Pizzuta di Avola", the wine known as "Nero d'Avola" and the "Femminello Siracusano" lemon.

The Avola almond, with its perfect oval shape, as Leonardo Sciascia wrote, and Nero d'Avola, originating from the ancient vine of the same name, are famous throughout the world for their unmistakable flavours. The main feature of the Avola coastline is the 'Rotonda sul mare' (roundabout by the sea), a major tourist attraction where evenings of music and entertainment are held.

Its geological aspect is included in the Hyblean Area; this area is a structure that constitutes part of the northern offshoots that emerged from the African Plate, which has in the Mediterranean, and therefore in Sicily, its point of collision with the European Plate.  But this area has another peculiarity, in fact geophysical researchers have discovered that in the area of the Hyblean Mountains a separate plate has formed, called the "micro-plate Siculo-iblea", it is part of the African plate but has its own particular dynamics, it includes a large part of Sicily and the surrounding seas and is responsible for the strongest earthquakes that have occurred in the eastern part of the island.

The Monti Iblei are composed of white limestone rocks with shells, more precisely carbonate rock originating from marine sediments deposited in the Miocene; in fact the area where Syracuse now stands was once submerged by water, as evidenced by the many shell fossils visible on the surrounding rocks. Its mountainous reliefs are not of considerable size, the city being close to the coast; there are mostly hills, the highest peak of which is Mount Epipoli.

Near Cassibile, however, there is a large canyon, which has been carved out over the centuries by the River Anapo. The Anapo is one of the rivers of Syracuse, which flows for forty kilometres, and has a mainly torrential character; then there is the river Ciane, a short watercourse that flows into the Porto Grande, where it joins the Anapo; it is a perennial river that is also fed during the summer period.

Another river is that of Cassibile, thirty kilometres long, winding its way between the municipalities of Palazzolo Acreide and Avola, then flowing into the Ionian Sea. The artificial canals that cross Syracuse are: Mammaiàbica, Pismotta and Regina. The lakes and small waterfalls are located within Cava Grande del Cassibile.

In the city there is a freshwater spring, the renowned Fonte Aretusa, and an artificial cave, known as the Grotta del Ninfeo, from which water from the Galermi aqueduct flows.  Syracuse overlooks the Mediterranean Sea, with the Ionian Sea basin.

Its coastline is mainly rocky, but there are also wide sandy beaches. The municipalities with which it borders are: to the north with Priolo Gargallo and Città Giardino (a district of Melilli), to the west with Solarino, Floridia, Palazzolo Acreide, Noto and Canicattini Bagni and to the south with Noto and Avola.  The territorial boundaries are delimited to the north by contrada Targia; to the west by Belvedere, a panoramic outpost; to the south by Cassibile and Fontane Bianche. 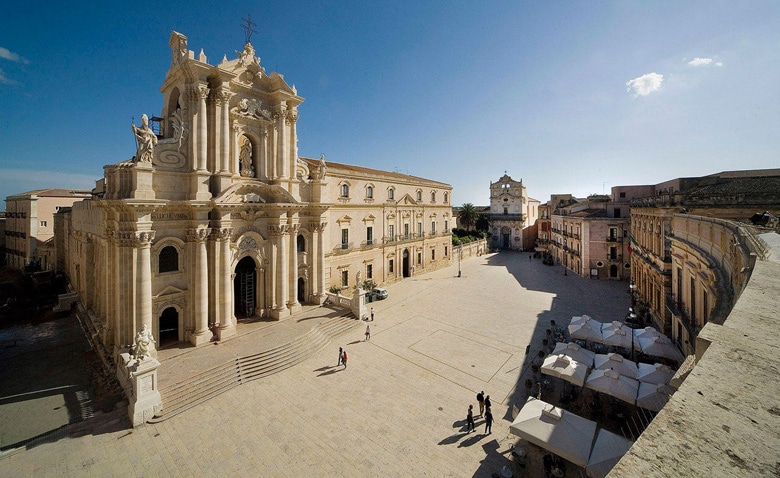 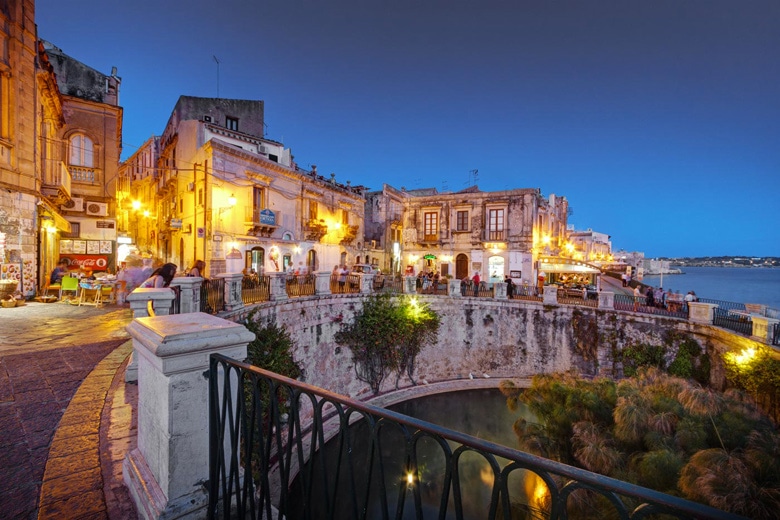 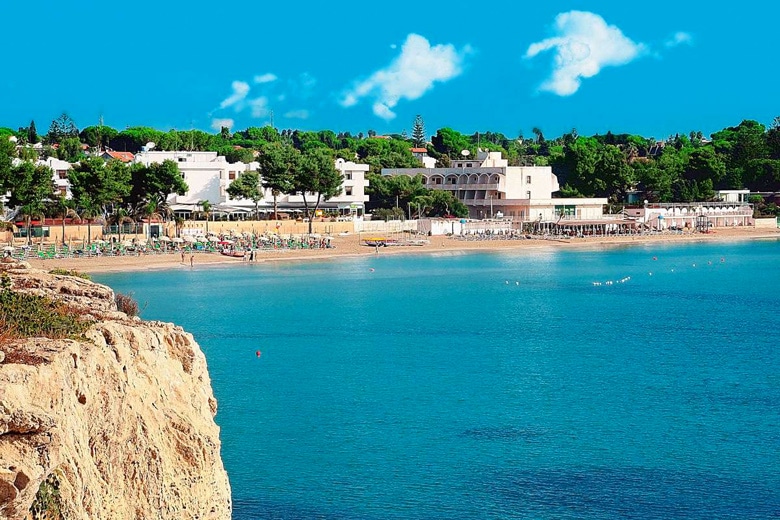 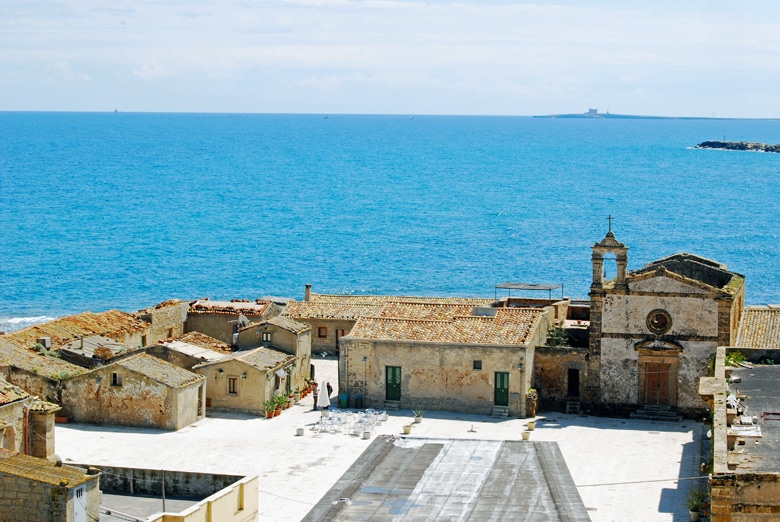 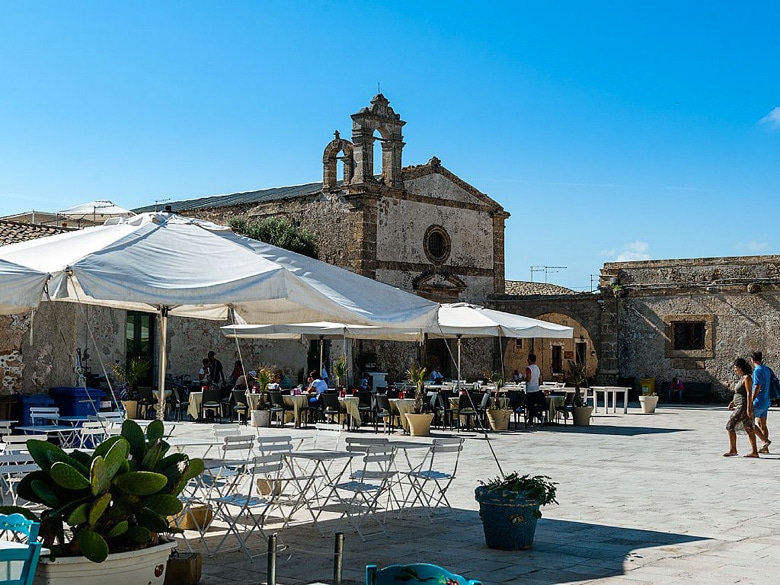 Marzamemi is a seaside hamlet, part of which belongs to the municipality of Pachino from which it is about 3 km away and a second part belongs to the municipality of Noto from which it is 20 km away. It is located in the province of Siracusa. The name derives from the Arabic Marsà al-hamām that means "Bay of the Turtledoves", as the area is an obligatory place of passage of small birds during migration. The village grew up around the landing place, which later became a fishing port, and developed thanks to this activity, which is still very much practised today, and it also has one of the most important tuna fisheries in Sicily. The tuna fishery of Marzamemi dates back to the time of Arab domination in Sicily. In 1630 it was sold by the owner to the Prince of Villadorata. The Villadoratas improved the buildings of the tuna fishery by bringing skilled carpenters from Avola and Syracuse, who then remained resident in Marzamemi.

In 1752 they built the palace and the church of the tonnara, and the sailors' cottages. In 1912 a factory was built in Marzamemi to process salted tuna and later tuna in oil. Tuna fishing was abundant until after the war.
In the past, ships also departed from the port of Marzamemi to transport large quantities of locally produced wine to various ports in the peninsula. The wine was also transported by goods trains to various places abroad, Marzamemi having been provided with a railway station. Until 31 December 1985, it could also be reached by passenger trains on the railway that runs from Syracuse and Noto along the territory of the Vendicari Reserve to Pachino.

Another source of development is fishing and the processing of fish products: the famous red tuna botargo, for example, is processed using ancient drying systems derived from the Arab-Phoenician culture. Marzamemi has a beautiful beach: in recent years, it has focused on tourism, offering the possibility of numerous equipped moorings for pleasure boats. In summer, the population increases considerably, thanks to the residential settlements that have sprung up near the old village. In August, St Francis is celebrated with a procession of boats, a "cuccagna" at sea and a regatta. In 1993 the historic village was used as a location by director Gabriele Salvatores for the film Sud, starring actors Silvio Orlando, Claudio Bisio and Francesca Neri. Since 2000 Marzamemi has hosted the Festival of Frontier Cinema.

We look forward to the most relaxing holiday of your life!

This website uses cookies to improve your experience while you navigate through the website. Out of these, the cookies that are categorized as necessary are stored on your browser as they are essential for the working of basic functionalities of the website. We also use third-party cookies that help us analyze and understand how you use this website. These cookies will be stored in your browser only with your consent. You also have the option to opt-out of these cookies. But opting out of some of these cookies may affect your browsing experience.
Necessary Sempre abilitato
Necessary cookies are absolutely essential for the website to function properly. These cookies ensure basic functionalities and security features of the website, anonymously.
Functional
Functional cookies help to perform certain functionalities like sharing the content of the website on social media platforms, collect feedbacks, and other third-party features.
Performance
Performance cookies are used to understand and analyze the key performance indexes of the website which helps in delivering a better user experience for the visitors.
Analytics
Analytical cookies are used to understand how visitors interact with the website. These cookies help provide information on metrics the number of visitors, bounce rate, traffic source, etc.
Advertisement
Advertisement cookies are used to provide visitors with relevant ads and marketing campaigns. These cookies track visitors across websites and collect information to provide customized ads.
Others
Other uncategorized cookies are those that are being analyzed and have not been classified into a category as yet.
ACCETTA E SALVA